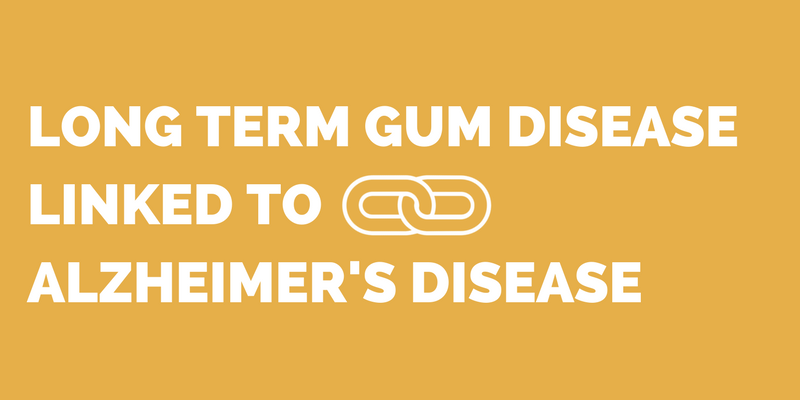 A new report published on August 8th in the journal Alzheimer’s Research & Therapy found that chronic gum inflammation (AKA periodontitis) could be associated with an increased risk of developing Alzheimer’s disease. Scientists in Taiwan used the National Health Insurance Research Database of Taiwan to investigate the link. Their study examined 9,300 patients with a recent diagnosis of chronic periodontitis and compared them with 18,700 others who were followed over more than a decade. All of the patients were over age 50. Researchers discovered that the patients with chronic gum inflammation lasting longer than ten years were 70% more likely to develop Alzheimer’s disease.

Alzheimer’s disease is the most common cause of dementia in older adults. Periodontitis is inflammation of the gums caused by bacteria, plaque, and tartar build-up. When gums become inflamed, they begin to pull away from the teeth, forming spaces which can become infected. Gum disease leading cause of tooth loss. It is also associated with increases in markers of inflammation throughout the body. Researchers concluded that the findings of their study “support the notion that pro-inflammatory factors due to [gum disease] may slowly and progressively induce neurodegenerative changes that lead to the development of Alzheimer’s disease” (Alzheimer’s Research & Therapy).

It’s important to mention that this study did not prove that gum disease directly causes Alzheimer’s found and no overall link between gum disease and Alzheimer’s. According to a scientist quoted by Reuters:

“’It is believed that the association between periodontitis and Alzheimer´s disease may be bi-directional,’ said Dr. Yago Leira Feijoo from Universidad de Santiago de Compostela in Spain who wasn’t involved in the study. ‘Currently, with the scientific evidence that is available, we cannot be sure if the risk factor is either periodontal disease or Alzheimer´s disease,’ Leira Feijoo said by email. ‘Because periodontitis is a preventable and treatable disease, periodontal patients should be aware of the potential risks of gum infection and the systemic impact that could have,’ he added. (Reuters Health)

Gum disease can be treated and managed through a combination of gum therapy, frequent gum care visits, and home care.