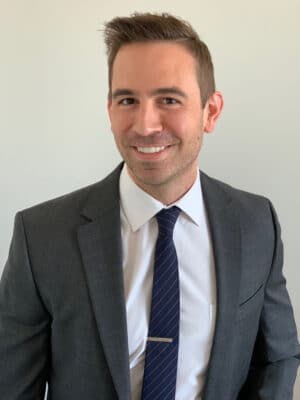 As a Florida native, Dr. Jared Miller completed his undergraduate studies at the University of Central Florida, earning a Bachelor of Science in Molecular Biology and Microbiology. He moved to New York City the following year to begin his dental education at New York University’s College of Dentistry. After graduating, he furthered his knowledge with a general practice residency at NYC Health + Hospitals/Woodhull, where he remained for the next six years to pursue a specialization in Oral and Maxillofacial Surgery.

He has received thorough training in dentoalveolar surgery, dental implantology, facial trauma, maxillofacial pathology, orthognathic surgery, and TMJ surgery. During his final year of training, Dr. Miller served as Chief Resident of the Oral and Maxillofacial Surgery service and was recognized as Resident of the Year. Dr. Miller’s current clinical practice is focused on dentoalveolar surgery, bone grafting, dental implantology, and maxillofacial pathology.

Dr. Miller is certified by the State of New York to provide general anesthesia, allowing him to offer intravenous and inhalation sedation to provide optimal comfort and care to his patients. He is currently on staff as an attending at The Brooklyn Hospital Center, where he continues to work alongside residents in both the operating room and the outpatient clinic. He maintains current certifications in Basic Life Support, Advanced Cardiac Life Support, and Advanced Trauma Life Support.

During his spare time, Dr. Miller enjoys weightlifting, yoga, scuba diving, and spending time with his family, friends, and pets.

Q: How do you want people to feel when they come to see you?
A: Excited would be nice, but I realize that’s a big ask for someone about to see the oral surgeon! Truthfully though, most people end up being pleasantly surprised by the ease of the experience.

Q: If you could tell people one thing about wisdom tooth extractions, what would it be?
A: Don’t put it off! Early removal (late teens to early twenties) is the key to a smooth and quick recovery.