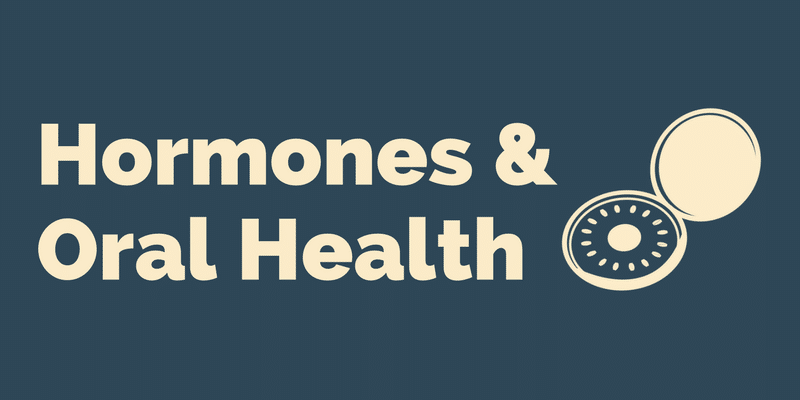 Next up in our ongoing series highlighting connections between oral health and overall health: hormones. Hormonal fluctuations that occur through a woman’s life can have a strong influence on her oral health.  An increase in the female hormones estrogen and progesterone can increase blood circulation to the gums causing them to become more susceptible to swelling, discomfort, and discoloration. A 2012 study in the May issue of Oral Health and Preventive Dentistry reviewed 61 journal articles with nearly 100 studies. Researchers found “There’s definitely a gender-specific connection between women’s hormones, gum disease, and specific health issues impacting women.”

According to the American Academy of Pediatric Dentistry, adolescents actually have a higher prevalence of gingivitis than children or adults. During puberty, the female body increases production of estrogen and progesterone. Studies suggest that an increase in these hormones affects the composition of the bacteria in the mouth and increases blood flow to the gums. As a result, the gums become swollen and are more easily irritated by food and plaque, and are more susceptible to gingivitis. Usually, the body accommodates to the ongoing presence of hormones, but gingivitis is a reversible form of gum disease and can generally be managed by proper brushing and flossing habits and consistent dental visits.

Some, but not all, women experience oral changes that can include bright red, swollen, and/or bleeding gums and swollen salivary glands thanks to the usual hormonal changes that occur during the menstrual cycle. As estrogen and progesterone surge, blood flow to the gums increases, and the ability to fight off plaque and other toxins decreases. This is known as “menstruation gingivitis” and usually occurs a day or two before the start of your period, but clears up shortly after your period begins. One study found that woman with healthy gums were less likely to experience this than women with existing gum inflammation.

It’s common for people who use hormonal contraceptive methods to experience some level of gum inflammation, and longtime users of oral contraceptives (especially progesterone-only versions) might be at a higher risk of advancing gum disease.

Measurable changes have been observed in the saliva of women taking oral contraceptives, including a decrease in concentrations of protein, certain acids, hydrogen, and electrolytes; in some studies, changes in salivary flow have been reported. In one study, women between the ages of 20-35 taking birth control had deeper gum gaps and more bleeding than non-users. Newer, lower hormone methods may have less of an effect on oral health, but many cited studies are recent.

If you’re using birth control, especially methods with a higher level of hormones in them, be sure to stay on top of your home care routine, and some to see us regularly. You should also let us know, both because we can help you take steps to prevent or heal gum disease and also because oral contraceptives can lower the effectiveness of specific antibiotics used to treat infections.

Pregnancy brings about changes to various systems in your body, and your mouth is among them. Hormone levels change considerably and increase your susceptibility to bacterial plaque, which might cause your gums to swell and bleed more easily. Changes in oral bacteria also play a role. “Pregnancy gingivitis” as it’s called, is usually most noticeable during the second to eighth month of pregnancy and occurs to about 40% of mothers-to-be.

Our hygiene team recommends that expecting mothers get an additional cleaning during their pregnancy to help decrease the buildup of plaque and the bacteria that comes along with it. Some insurance companies even have plans that cover this extra cleaning for pregnant women.  Some gingivitis can be avoided or at least minimized by establishing low plaque levels at the beginning of pregnancy.

Menopause brings change to woman’s life and a woman’s mouth. Possible hormone-related oral health changes that occur around menopause include altered taste, increased sensitivity, dry mouth and bone loss. The last two are the ones to be the most aware of. Since saliva rinses cavity-causing bacteria away and neutralizes acids produced by plaque, when its flow decreases, your risk of cavities increases. Sucking on ice chips or sugar-free candy, drinking or using an over-the-counter dry mouth spray or rinse can help. At night, sleeping with a humidifier on in your room can also make a difference.

Decreased estrogen levels also increase the likelihood bone density will decrease, which can affect your teeth if your jaw bone is affected. Receding gums can be a sign of bone loss. To help reduce your risk, make sure you’re getting enough calcium and vitamin D, don’t smoke, and avoid excessive alcohol consumption.  Hormone therapy could also help preserve oral health after menopause.

The good news is, damage from hormone-related gingivitis can be managed or reversed if you’re diligent about coming to see us multiple times a year and follow an at-home routine that includes brushing and flossing consistently.

COVID-19 Update: We're currently open for routine, emergency, and elective care on a modified schedule with more time reserved for each visit. We look forward to offering online scheduling again soon! In the meantime, please call (212) 579-8885, text (646) 681-4146, or email office@cpwdentistry.com and we will be happy to help arrange a visit.